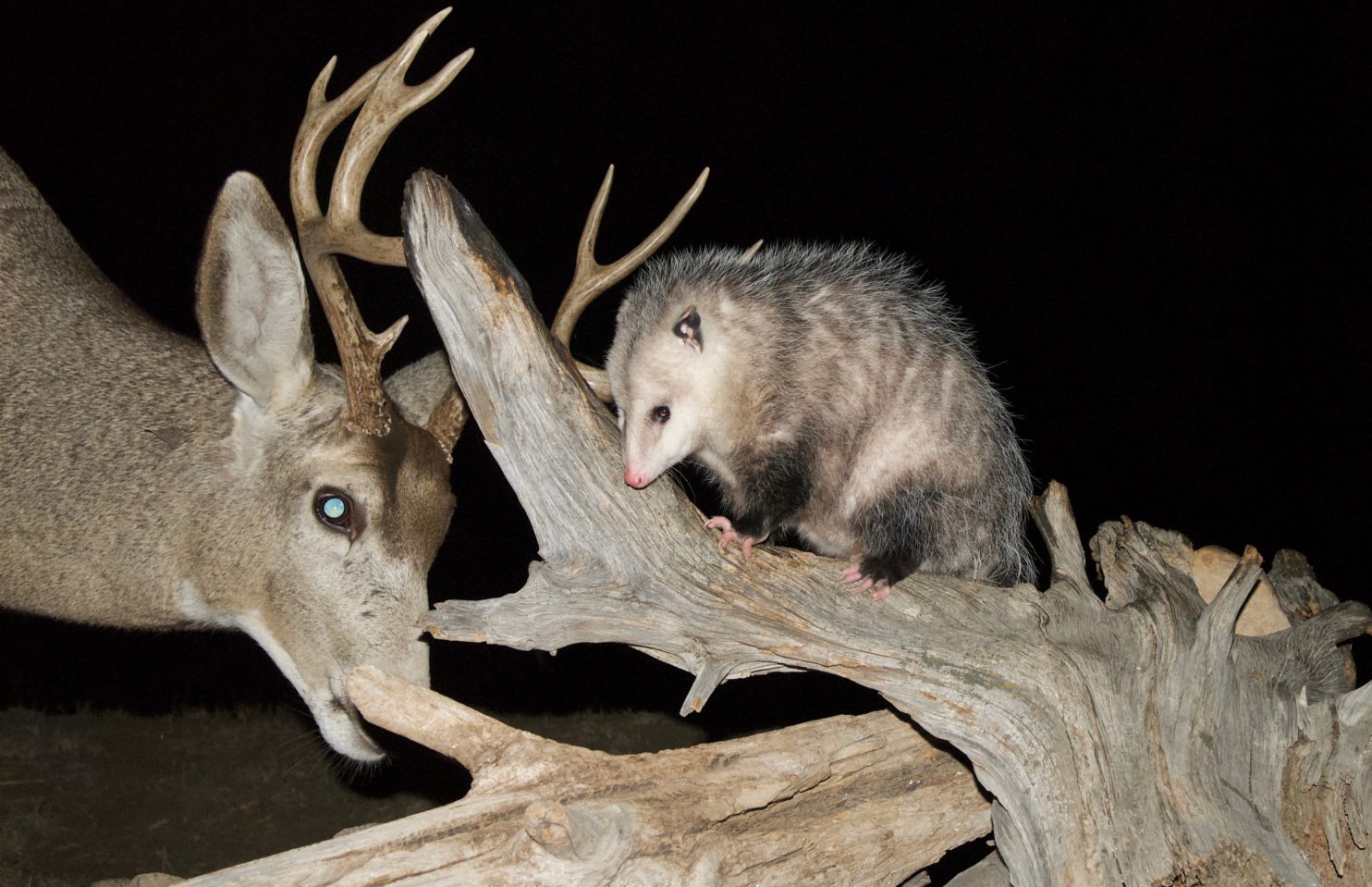 It’s interesting to know what animals  trail around your house at night, even in the city.  Hence, I have a camera or three set up out back.  My morning ritual is to retrieve the memory cards from the cameras–even in winter–, get a cup of coffee, and sit at my computer to look at the pictures.  This Summer my interest has been mainly on Opossums.  This was sparked by a query from a “nearly” professional photographer named James Beissel of Boulder, Colorado.  He is attempting to photograph a list of seventy animals native to Colorado.  He has the bear, the lynx, bobcat and even Ringtail Cats (which surprised me) but he did not have the Virginia Opossum.  Yes, it is Opossum.  The Possum is another animal in Australia.    He found me through this website and asked if I knew where he could find some Opossums as they are only in extreme eastern Colorado.  He mentioned some near disasters in his attempts  to photograph them in southeastern Colorado, including poison ivy and “Vigilantes” with guns, large pick-up trucks, and spotlights.   I suggested my backyard as an alternative and he drove down to set up his camera trap, which is much more elaborate and expensive than my simple Trail Cameras.  He drove down three times over two months before he got the quality of picture he wanted.   You can find some of his pictures at his website, https://www.jamesbeissel.com.

Many animals of the night get along.  Both eat the bait I have put on the drift wood. 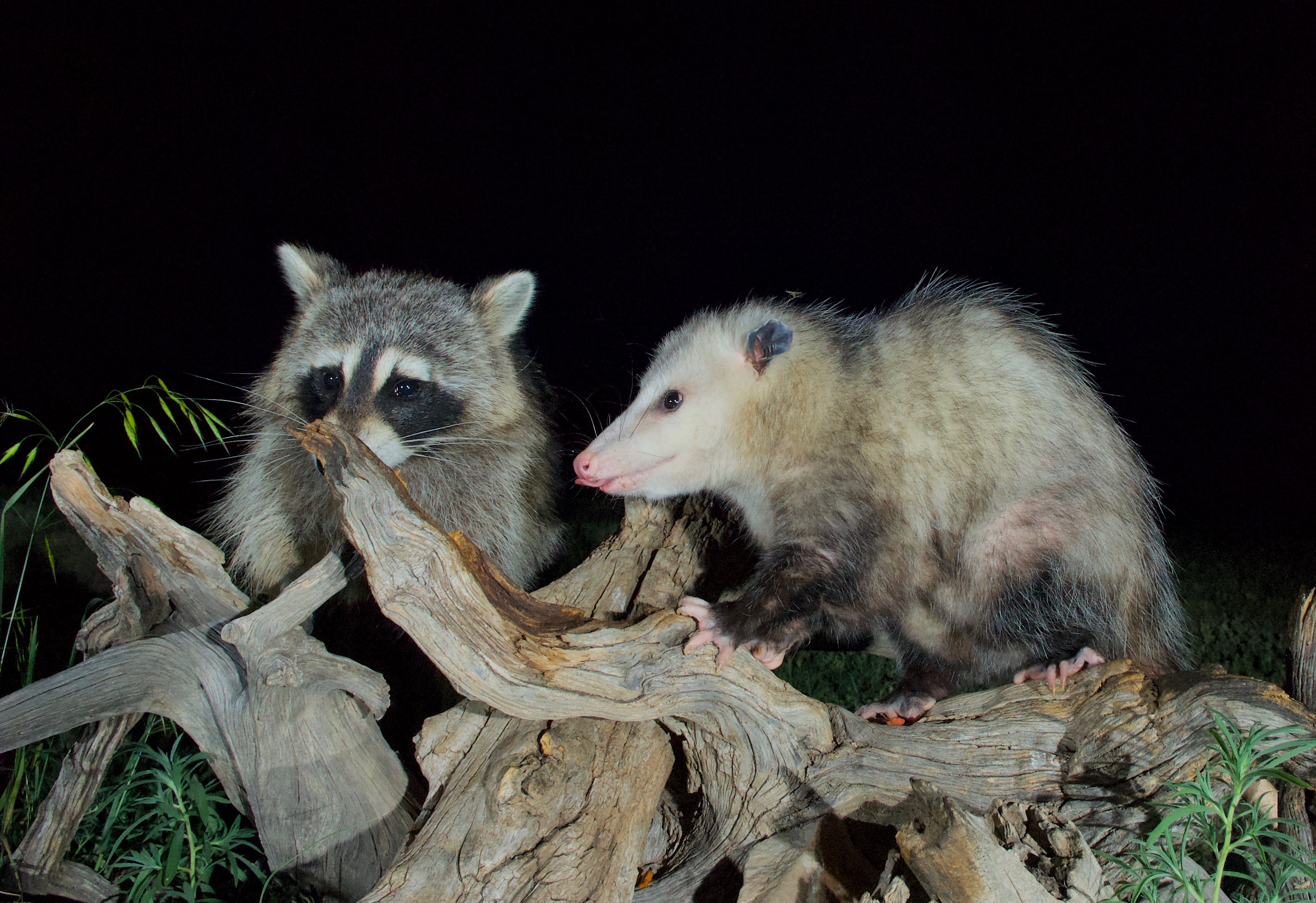 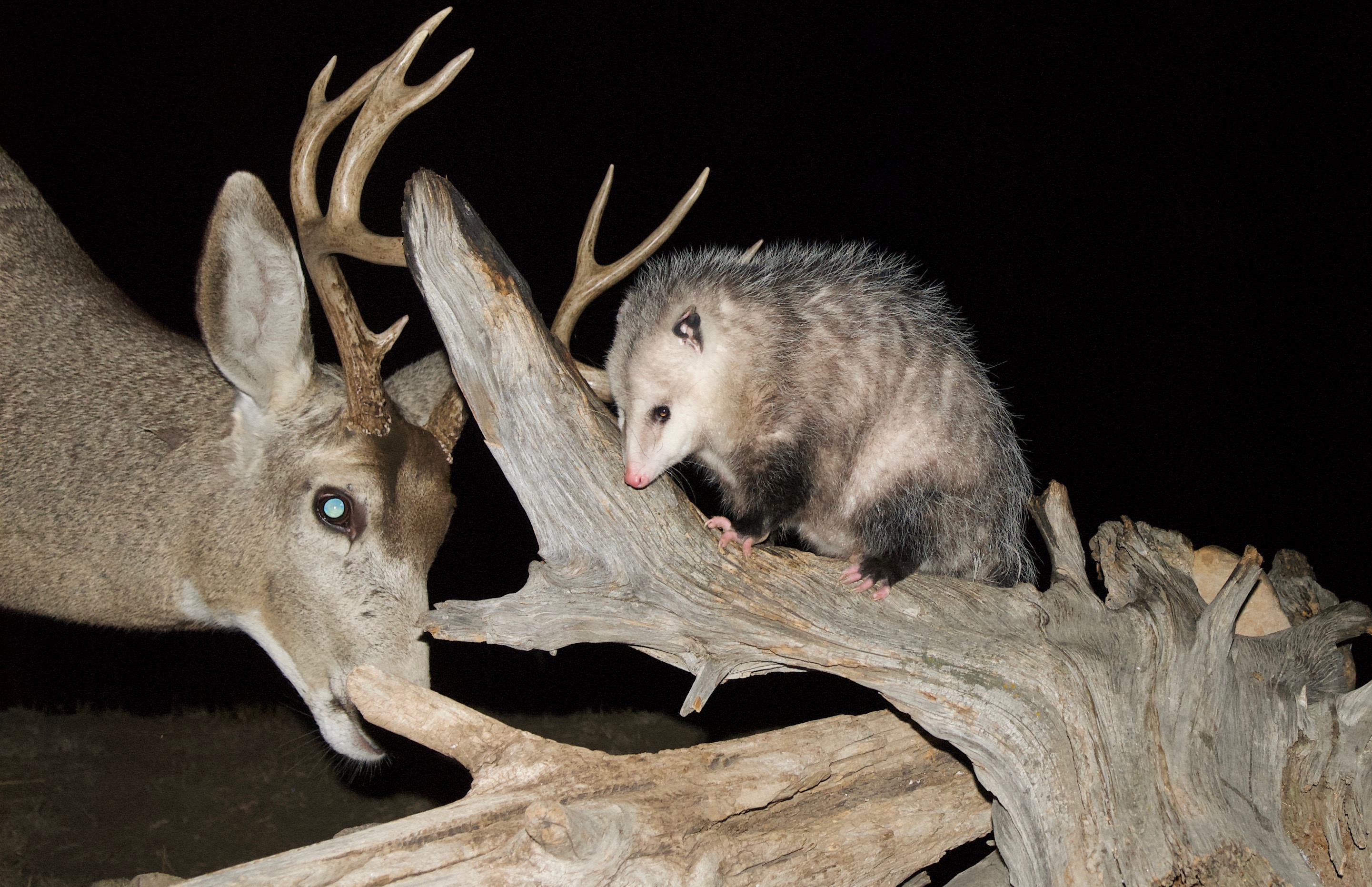 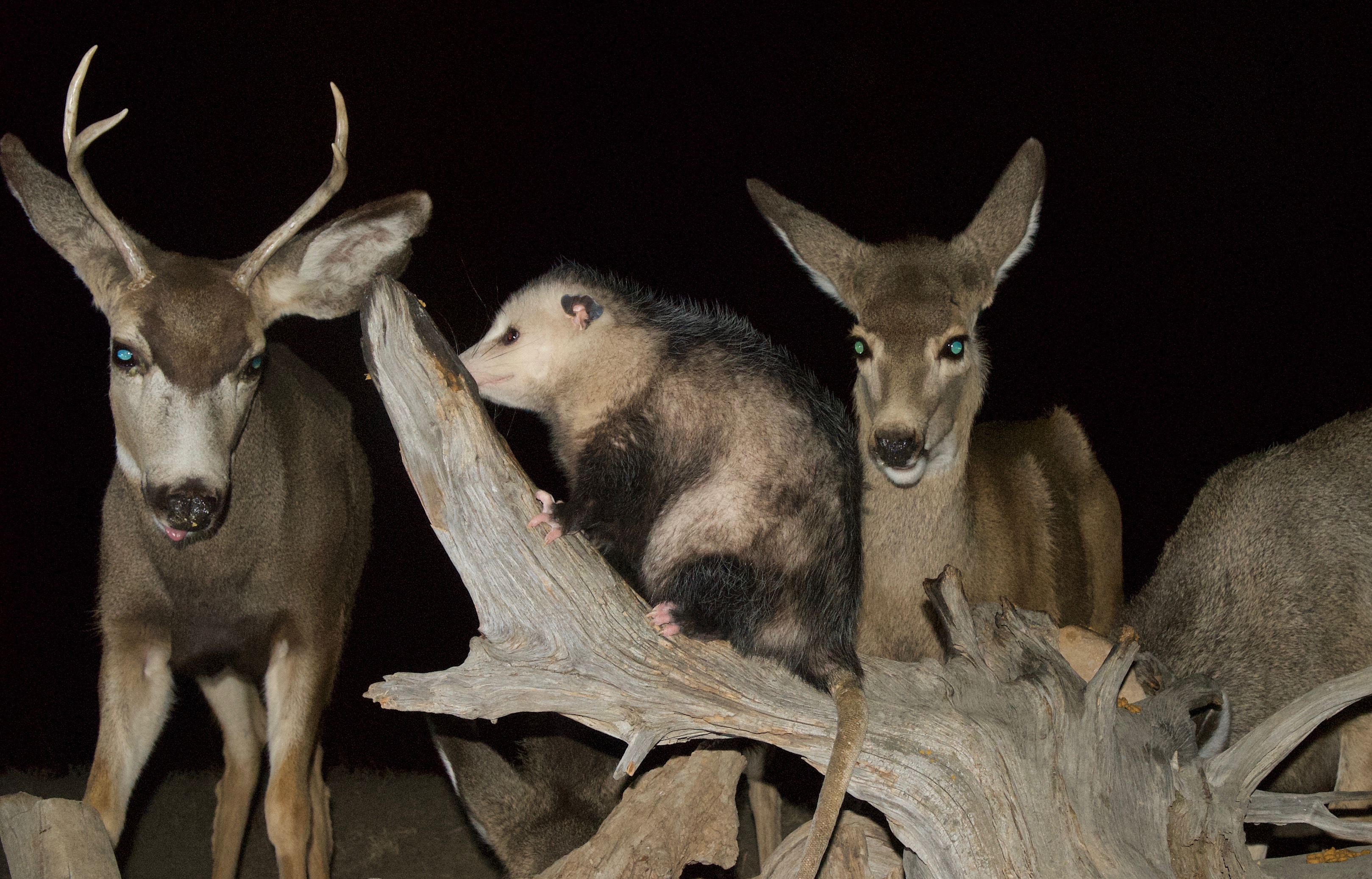 What says Halloween more than an Opossum on a Pumpkin? 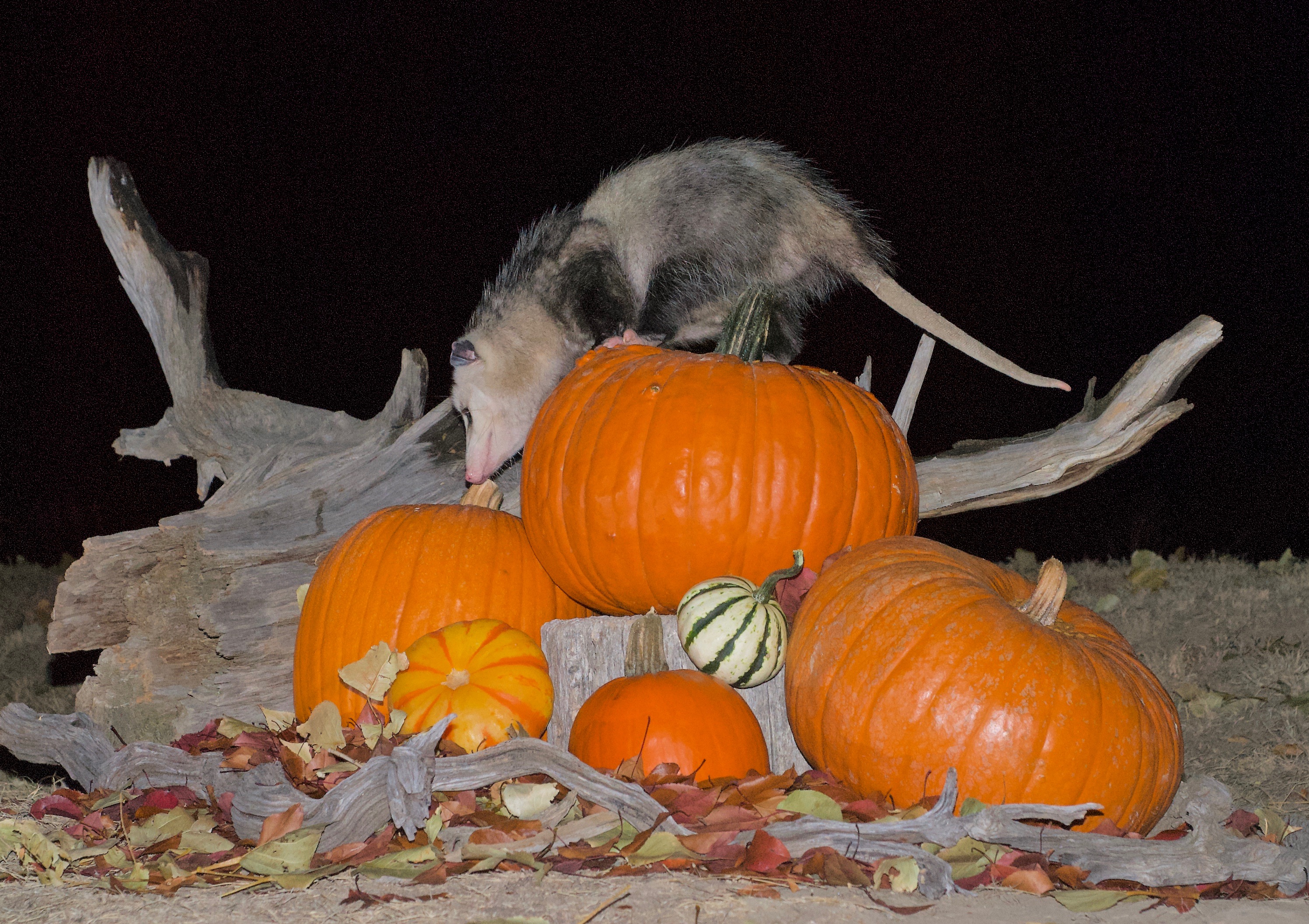 While trying to attract Opossum, I have to contend with another animal in the neighborhood that also likes peanut butter.  You probably notice the difference in quality that my new outdoor setup has over the cheaper–and still very good–trail cameras.  The trail cameras have the time and date stamp on them.  And an advertisement for the camera. 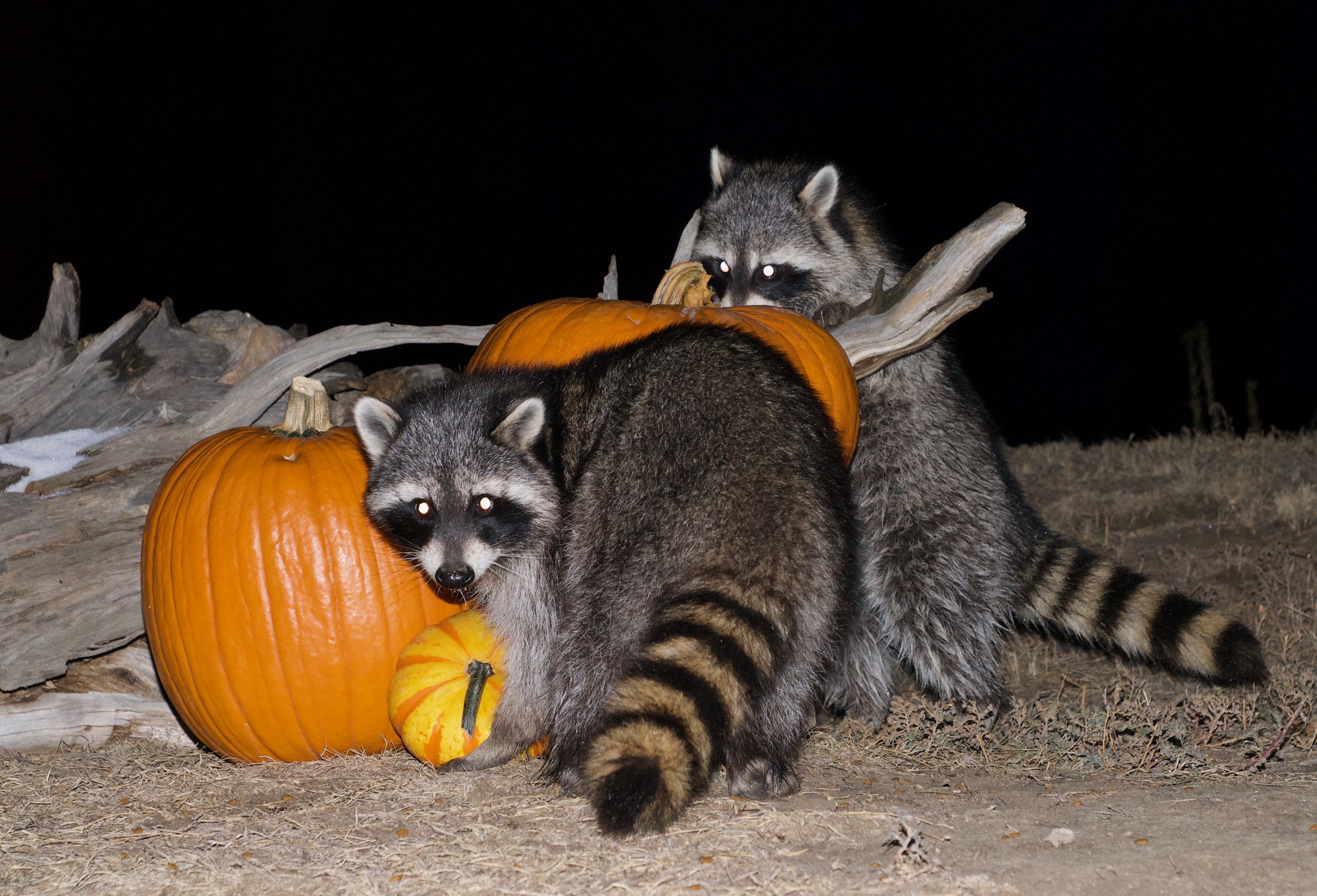 Below is Chubby, filled with babies in her pouch.  I am still hoping to get a picture of an Opossum with the babies on her back.  (This animal may or may not be alive.  I found a roadkill about a mile from my house which also included a dead baby.  I haven’t seen this particular animal since.) 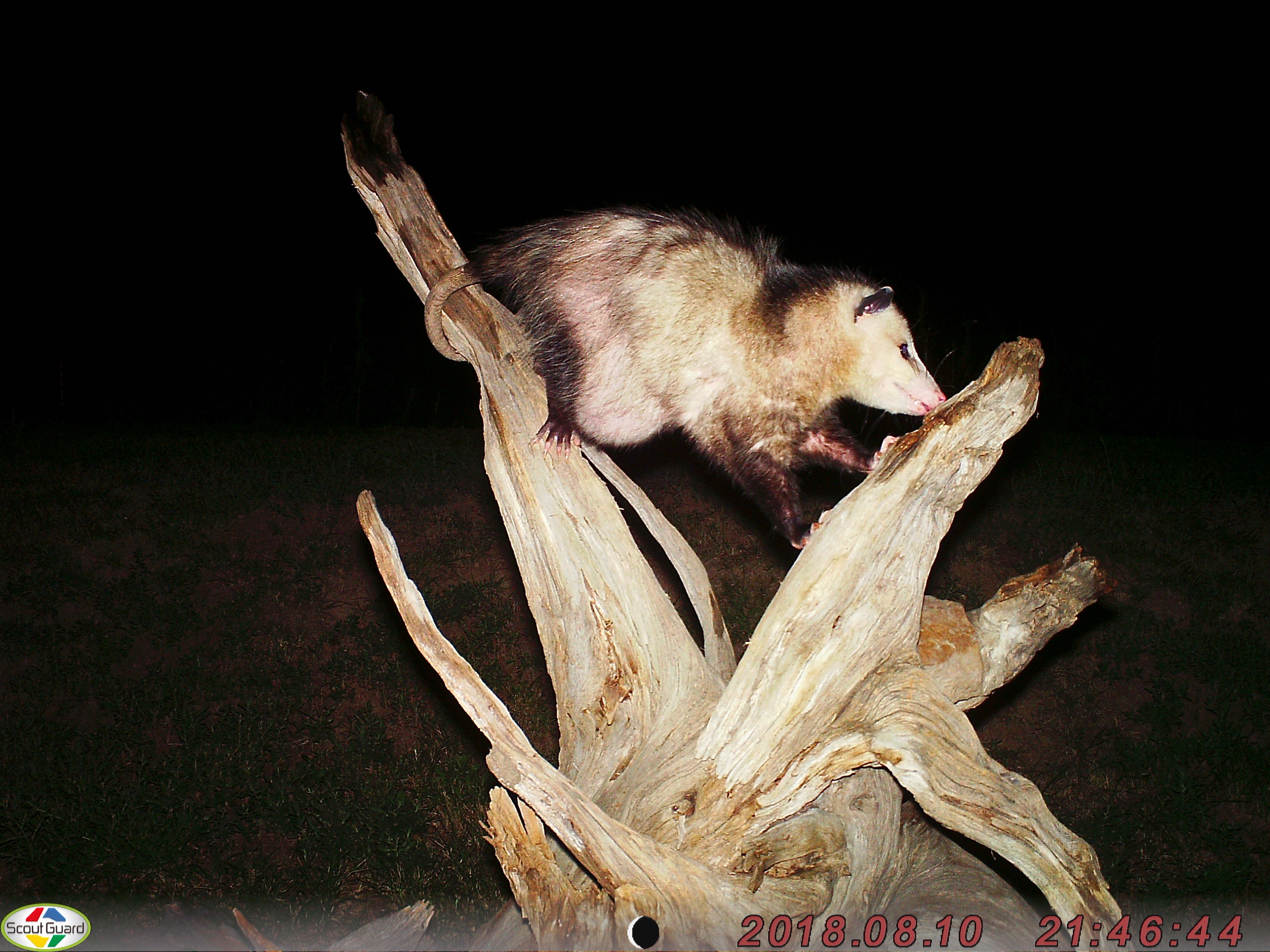 Training them to perform for me proved simple.  James Beissel used a professional scent which produced a half-hearted reaction from the animals.  I discovered the scent that would make them dance.  Peanut Butter.  This little guy, or gal is still around, as is another or two large ones.  They do look similar.  People often go “ugh” when they see a picture of an Opossum.  “So ugly.”  I don’t see it.  Must be the tail. 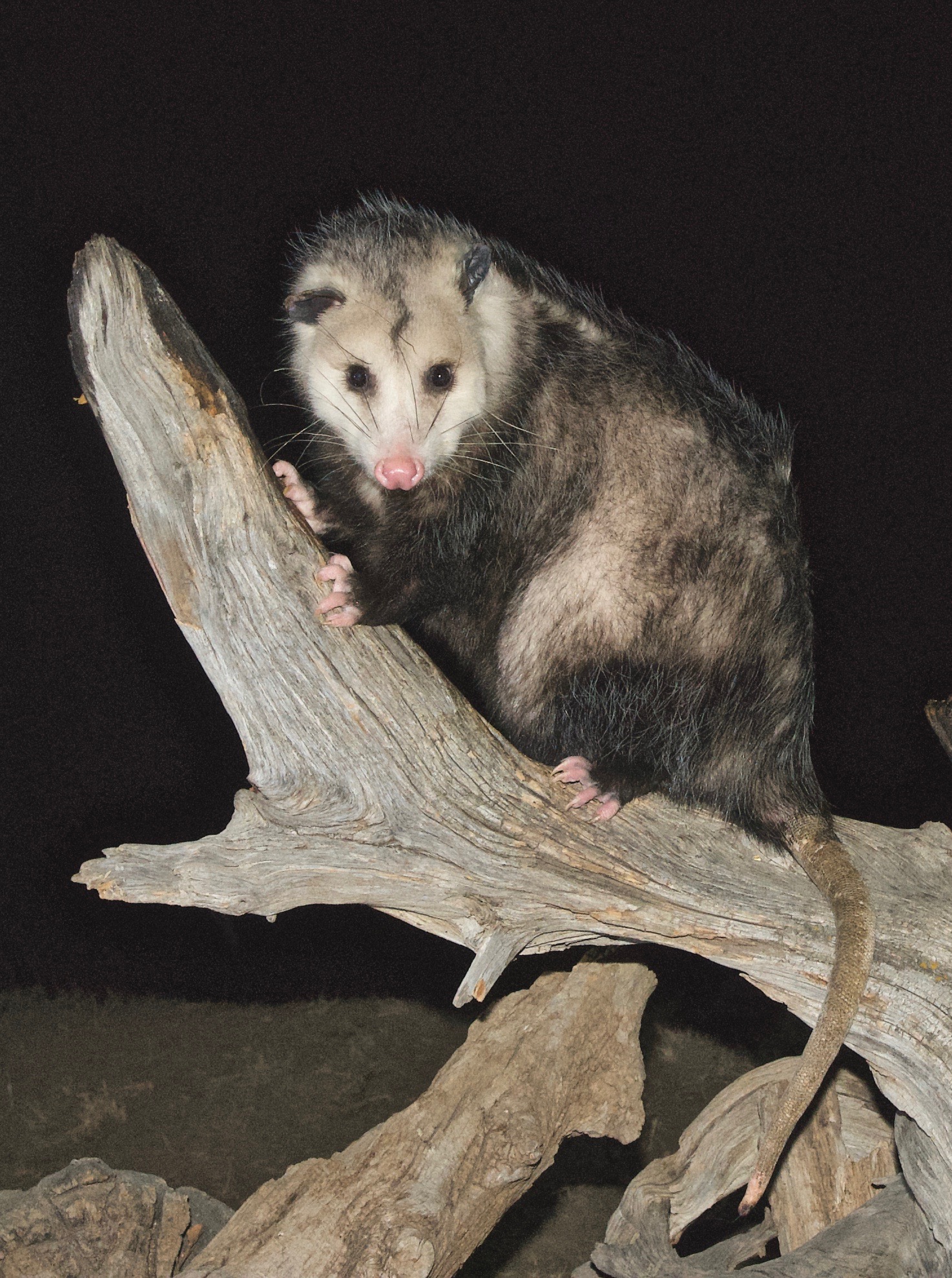 This is James setting up his camera trap. 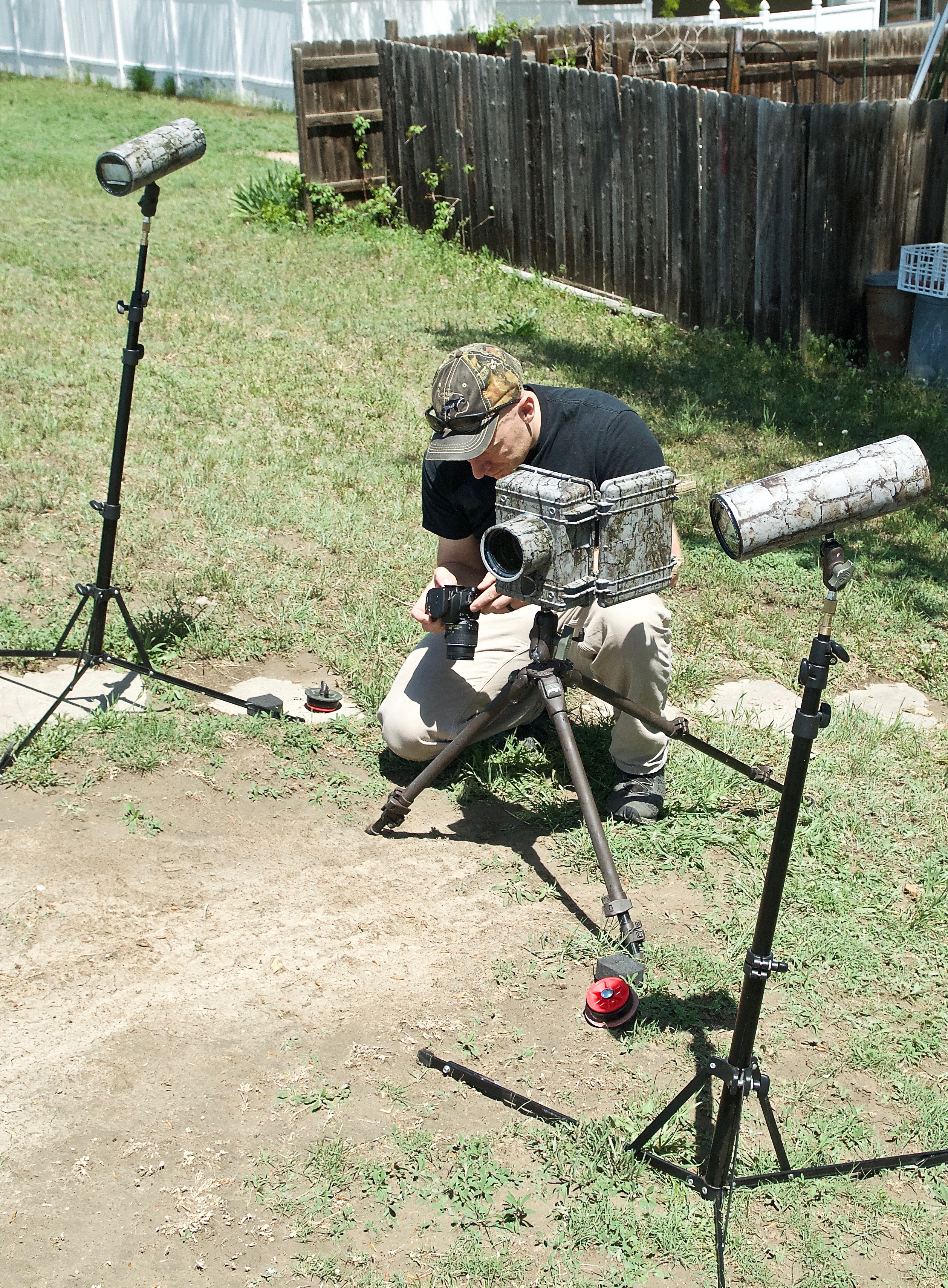 A problem is that one can not mention peanut butter without attracting. . .well have another look .  (There were two mommas this Summer, one with four babies, the other with three.  Incidentally, the mothers have six nipples.  And, brace yourself, the female Opossums–thirteen.) 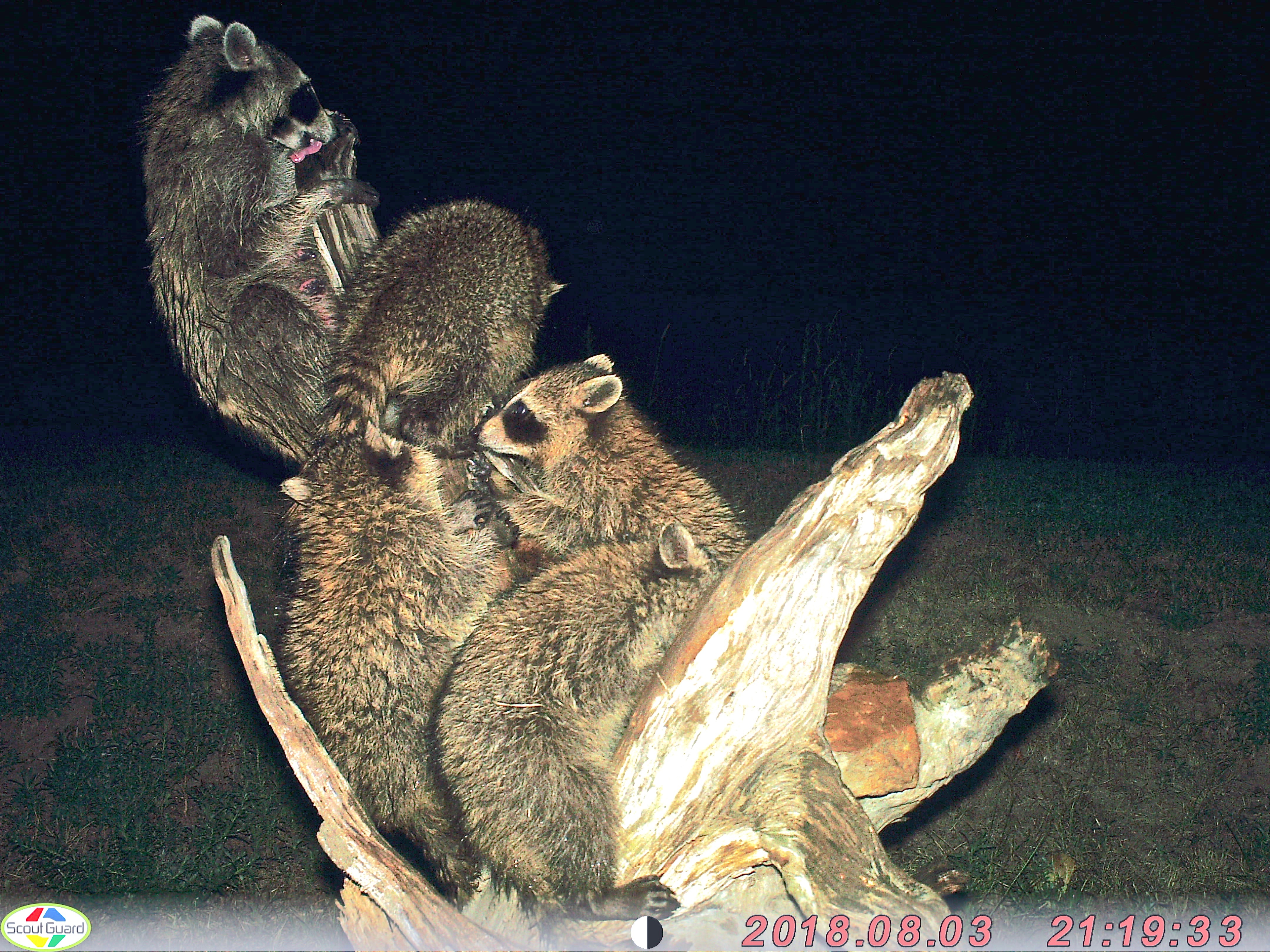 I developed an attractant that proved even better than peanut butter.  Peanut butter and Jelly.  The fellows below are wet as they have just swam an irrigation ditch to get to the site. 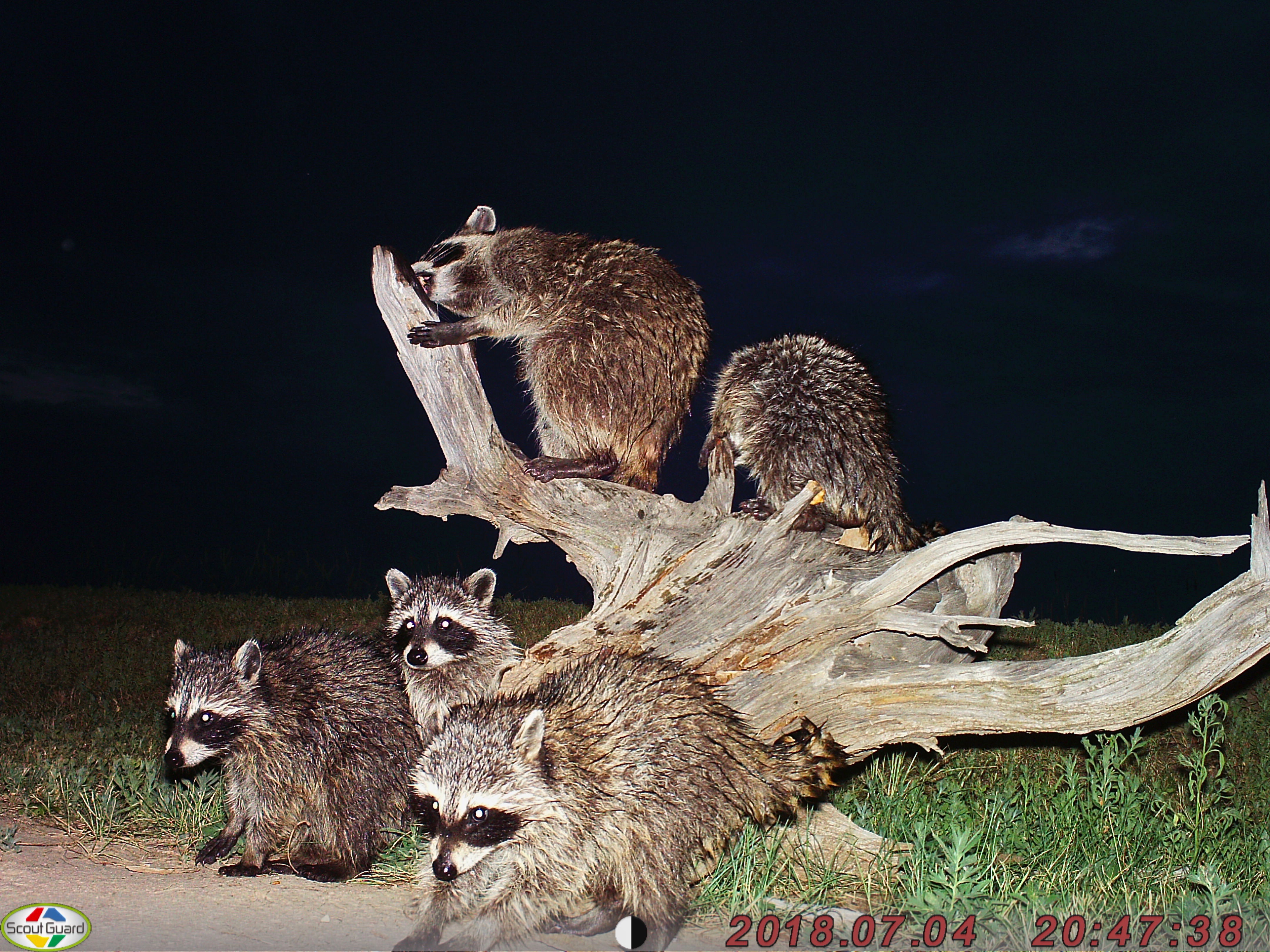 Some tastes are obviously universal. 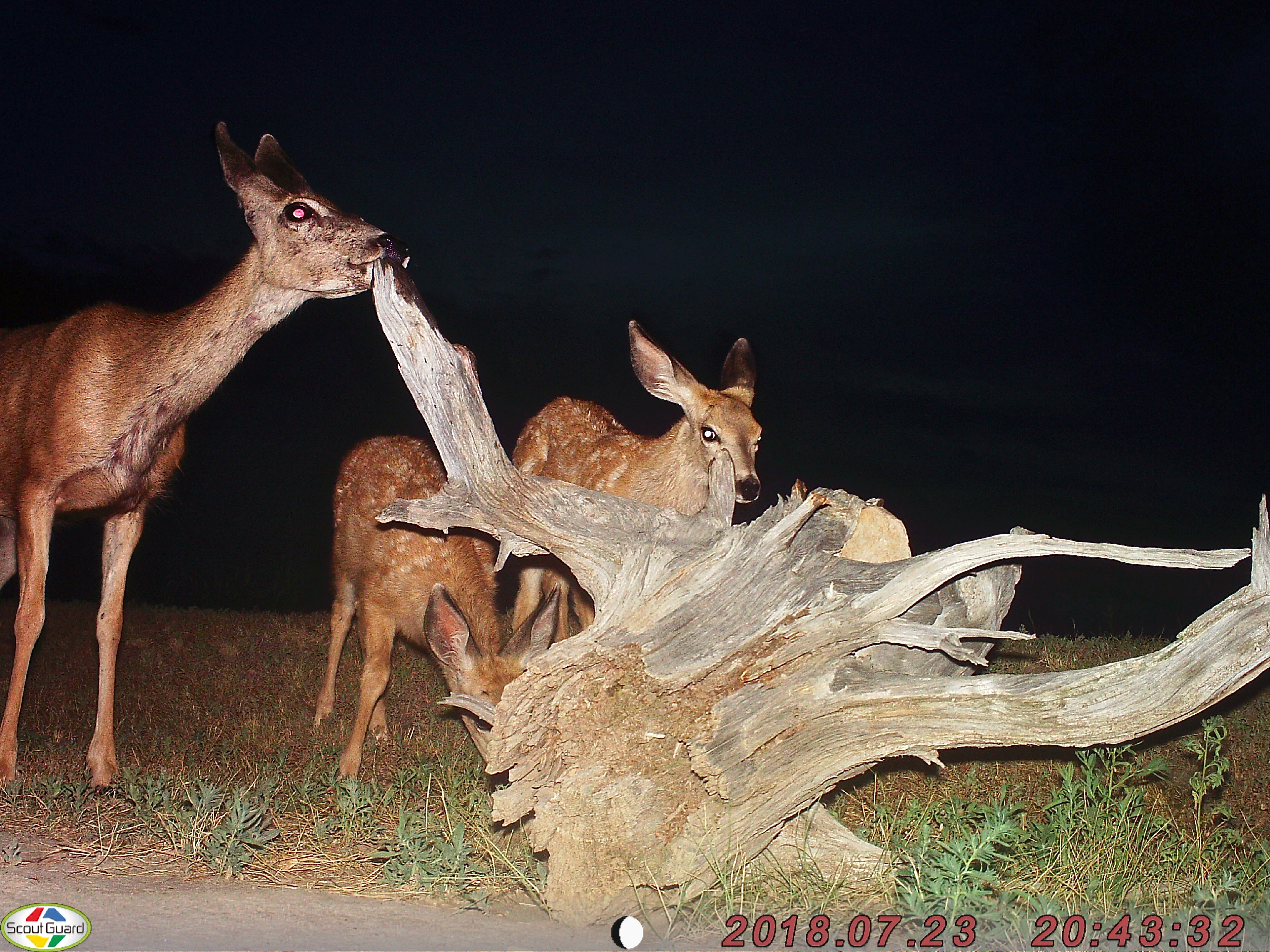 For a diversion, I took one of the Trail Cameras to an old irrigation pump house to photograph some baby Turkey Vultures.  (The better, real camera, pictures are elsewhere on this site.  Finds birds in the pulldown menu or simply type “Vulture” into the search option.) 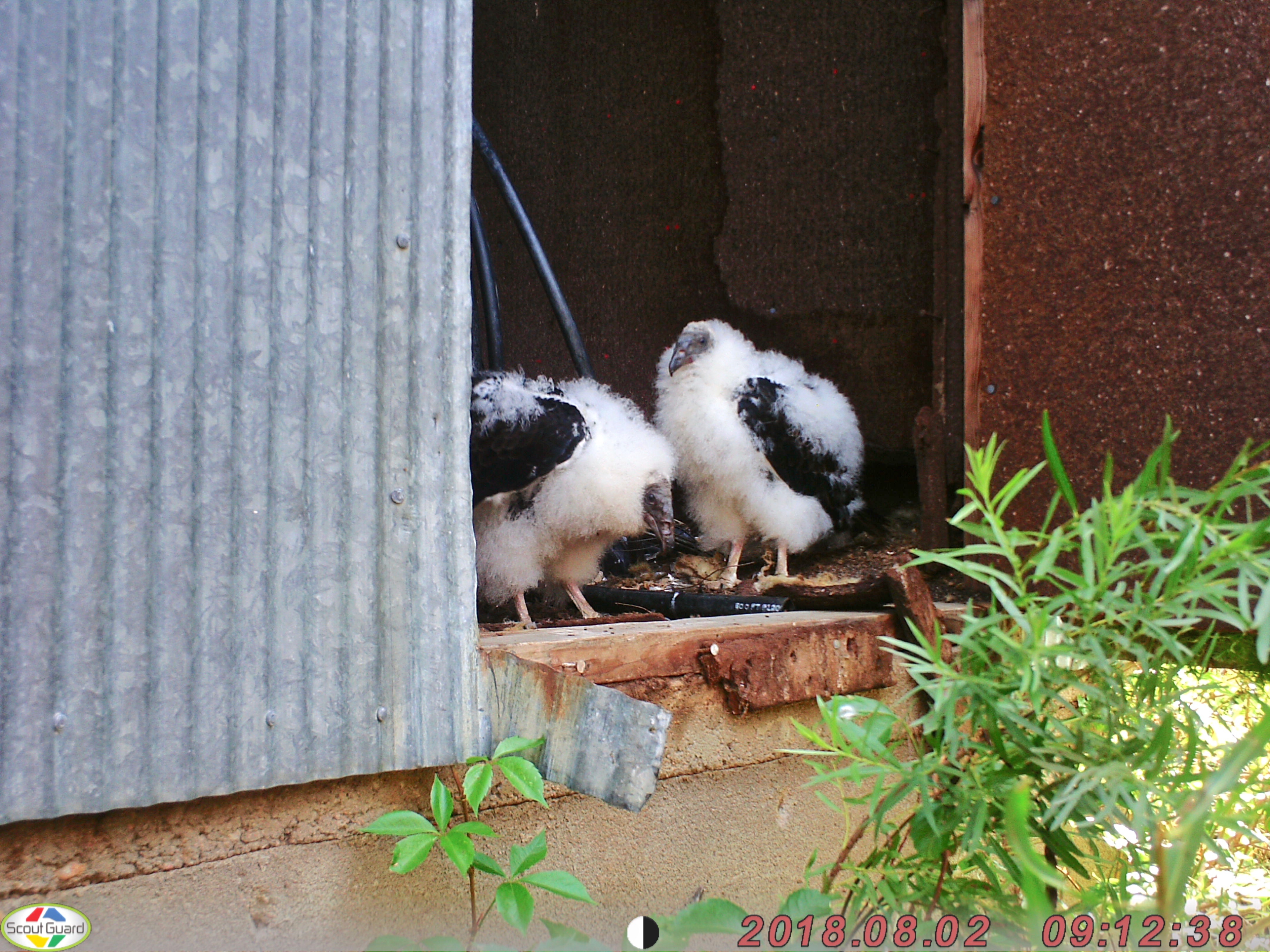 At times the little Trail Cameras can produce art.  The storm is obvious, but what is the semi-flying creature just to the right of the red stone embedded in the cedar tree roots.  There is a series of movies titled “Sharknado” which might be about this very critter my camera captured. 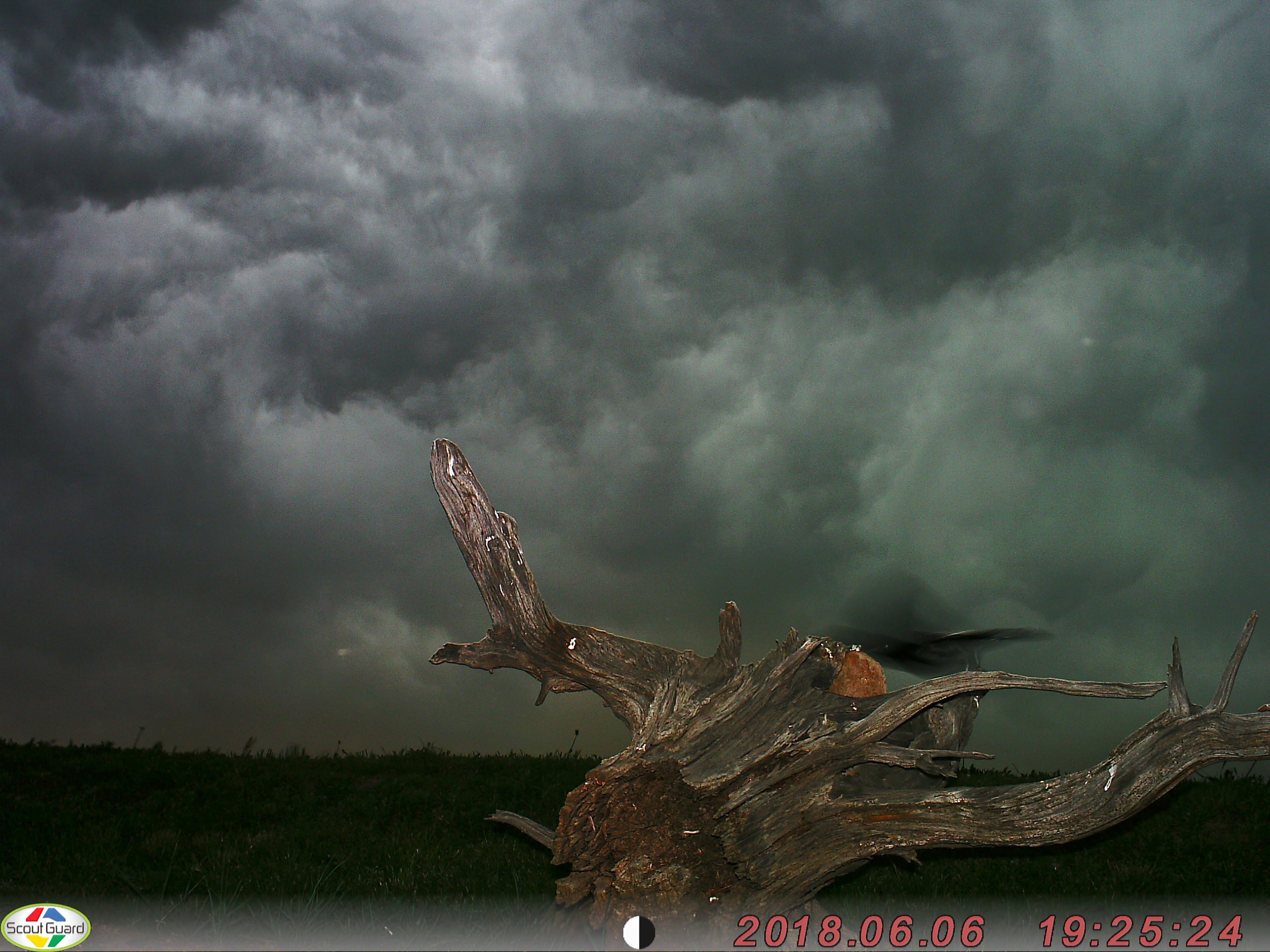